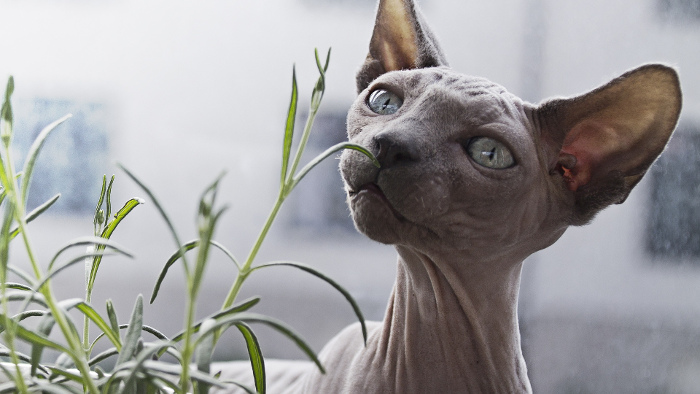 Personally, I think they look like the feline version of a greyhound, and they are just as athletic. They have oriental features with big almond shaped eyes, triangular faces, and bat-like ears. Their bodies are long and tubular and they have loooong long legs! And don’t get in the way of that whip-like tail! Because they have oval paws they are pretty good at doing mischief like opening doors, so you may need to take extra precautions about cupboard doors and things like that. And toilet lids. And china ornaments…

There are five possible coat types.

1. Ultra bald – not a hair anywhere, and will never, ever grow any!
2. Flock or Chamois are almost bald but have soft hair on their noses, tail, and feet. Their whiskers can be curly.
3. The Velour Coat Peterbald has about three-quarters of its body covered in such short hair that it is almost invisible, and this hair may decrease with age.
4. Brush-coated Peterbalds have more bristly hair than the others. There could be a bit of a wave in it, and it may be about 1/4 inch long, but kittens born with this type of hair, if it’s fine and thin, can go bald by the time they are young cats around 2-3 years of age. If they are fortunate those with denser fur will stay that way.
5. Straight-haired normal coated cats will not lose their hair because they don’t have the baldness gene. This is also the only type of Peterbald cat that has straight and not curly whiskers.

In 1988 in the Russian city of Rostov on Don, a female cat called Varya began to gradually lose hair when she was four months old. Soon she was totally bald but very healthy. Her owners thought she was a Sphynx, another breed of hairless cat. She mated with another cat, a smoke-blue tabby called Dima, and again there were cats which lost their hair and one completely bald one. This meant that the hairless gene was dominant. I.E., only one of the two parents had to carry the gene to pass it on. In the Sphynx, the gene is recessive, because both partners have to have it.The new breed was called The Don Hairless or the Don Sphynx.

This is the origin of one part of the Peterbald breed.

The founding members of the Peterbald breed were a male Don Sphynx called Afinguen Myth, and an Oriental Shorthair female called Radma Von Jagerhof. They were mated in 1993 and out of their first litter of four kittens came a little boy called Nocturne Iz Murino, and he is actually the father of the Peterbald breed. There is not one Peterbald today who is not a direct descendant of his. It was then declared an experimental breed by The International Cat Association (TICA) in 1997. In 1996 The Russian Selectional Feline Federation accepted them and in 2005 the Peterbald was accepted by TICA (The International Cat Association) and given Championship status. It was given Championship Class in American Cat Fanciers Association (ACFA) in 2008.

There are not many health problems with these exuberant cats, but there is one condition which may have a connection with the dominant gene for baldness. Feline Ectodermal Dysplasia may affect milk production in lactating queens and produce badly spaced or missing teeth. It is best to choose a reputable breeder who will test for this condition before he sells the kittens. These delightful kitties live for between 7 – 14 years. The males weigh in at 8-12 lbs and the females at 6-8 lbs.

He’s not averse to coming onto your lap and saying: ‘how are you feeling? Are you sad? What can I do for you?’

Then there is the: ‘pay attention to me! Stroke me! Pet me! Tickle my tummy! Give me tuna!’

And: ‘are you having breakfast? Can I have some too?’

‘Is that your favorite TV program? Gee! Mine too!’

‘Who said dinner’s ready? is it playtime? Who’s at the door? Well, hello there!’ And strangest of all: ‘where’s my best pal Rover? Why isn’t he barking? Maybe I should bark as well! Yeeeeooowl! I just love to hear the sound of my own voice!’

Best of all, they are always really glad to see you.

‘Hello, human! Where have you been all day? I’ve been missing you, so come in here and smother me with love!’

‘Is this your computer? Wow, it’s lovely and warm. I think I’ll just sit on this keyboard for a while!’

‘Wow! what’s in that cupboard? Let me just open it and see. Tuna!’

Peterbald cats don’t do well when left alone, and if they are upset they will tell you in no uncertain terms! Their voices, to be charitable, are somewhat less than melodic, but this cat is so incessantly affectionate that you won’t even notice. They are also very patient cats, so even if something is hurting or bothering them their preferred strategy is to turn the other cheek and simply make a stately exit. Their IQs are up in the stratosphere compared to other cats and they like to play puzzles, teasers, and games. Not to put too fine a point on it, this is an all-around, wonderful cat!

One caveat, though. This is a noisy creature and does like an active household, so he’s not suitable for retirees. And don’t even think about one of these if you are a first-time cat owner! They invented the term ‘hard work!’

The Peterbald’s skin needs to be taken care of very carefully. Because not many of them have thick hair and the rest are bald, they are very susceptible to sunstroke, so if they are going outside smother them with sunscreen (Don’t use the human stuff – get the one specially formulated for cats from your vet) and limit their exposure time. Cats are naturally crepuscular and nocturnal anyway, so this means that their active time is during the dark and semi-dark, but preferably keep them as indoor cats. Many cats, especially hairless ones, get sunburn even lying on a sunny windowsill for a few hours a day, so be extra vigilant.

Needless to say, a cat with virtually no coat is going to need a bit of extra help in winter. For kittens, you can use a thick woolen sock with holes cut into it for the legs, and for adults, you can get them at pet shops or online. You can repurpose old sweaters or get a kind friend to knit you one! (Don’t look at me – I’m booked up for the winter!) Needless to say, keep your kitty in the house and out of draughts and cold places during the winter. If you want to give him a really comfortable time you can get him a heating pad or a self-heating cat bed which works with the cat’s own body heat.

Cats with no hair get surprisingly grubby, accumulating naturally occurring oils on their skin. Normally furry cats would spread these oils around the body by grooming, but the hairless breeds can’t do this. They need regular baths to help them but use gentle baby shampoo, and a tiny bit of baby oil afterward to moisturize. NEVER blow dry or you can damage that delicate skin. Their feet and nails require quite a bit of attention in terms of cutting the claws and cleaning of the skin around the toes. Clean out the debris, wax, and dirt from the ears, and don’t forget the eyes. Because these cats have no eyelashes, all sorts of nasty gunk can get in there! Last but not least, their dental care is very important. Cats are prone to periodontal disease, so regular checkups and frequent brushing are the order of the day. You can get special cat toothpaste in poultry and salmon flavor and a host of others. (My cat loves them – he looks forward to brushing time!)

Because it is still such a rare breed, the cost of buying a Peterbald kitten is still quite high. Kittens sell for $1000 and upward. I won’t say the sky’s the limit but they are among the top five most expensive breeds in the world.