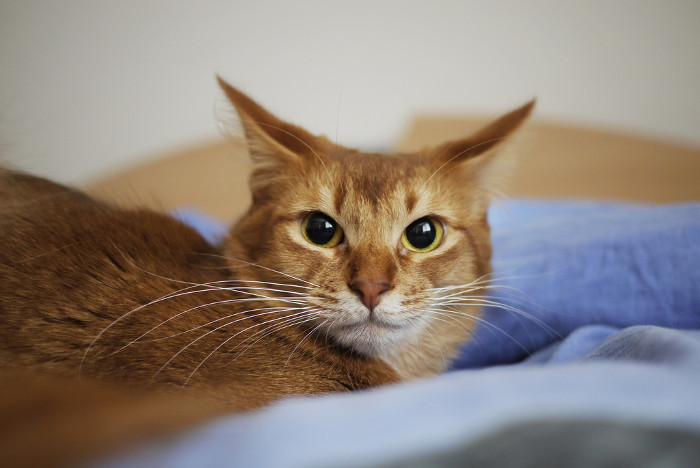 The Somali is a longhaired version of the Abyssinian. They have the same delightful personality and love of mischief but combine it with a strikingly beautiful semi-longhaired coat.

Often nicknamed the “fox cat” for their slightly wild appearance and beautiful, plumy tail, the Somali is a medium sized cat that typically weighs 6 – 10 pounds. They have a moderately long body that is lithe, graceful and athletic. The body should feel well-muscled and solid but not be coarse. The legs are long and slim with moderate bone. The tail is also long, plumy and tapering.
The head is a modified wedge with rounded edges that sits atop a well-arched neck. There is a soft curve from the forehead back over the skull that melts into the neck. The ears are large, cupped, and wide at the base. They are somewhat pointed and arch forward in an alert manner. They are preferably tipped. The eyes are large and almond in shape. They should be a deep, rich, brilliant color which does not have to be co-ordinated with coat color. Acceptable colors include copper, gold, green or hazel.

The coat is a double coat that is semi-long in length. It is soft and fine in texture. It may be a bit shorter over the shoulders but should have a notable ruff and britches. Like the Abyssinian, it is an agouti coat with multiple bands of color on individual hairs. There can be 7 – 20 different bands on a single hair. It creates a lush, rich pattern of color. They come in chocolate, ruddy, fawn, cinnamon, lilac, blue, and the silver versions of these colors.

Some believe that the recessive longhair gene has been hidden in the Abyssinian gene pool all along and longhaired kittens were simply unacknowledged by the community. Others feel it more likely to be a result of the lack of breeding stock after the World Wars. It is possible that some longhaired cats were used to restock the gene pool at that time. Regardless of how it came about, the longhaired Abyssinian kittens that occasionally appeared in litters caught the eye of various breeders in multiple countries. In the United States, it was Abyssinian breeder Evelyn Mague, of New Jersey, who took an interest in them. She was delighted to discover that she was not alone in her interest in the longhaired Abyssinians. Since modern Abyssinia is Ethiopia and Somalia is its neighbor, she dubbed the new breed the Somali.

Mague founded the Somali Cat Club of America with other breeders from the United States and Canada in 1972. Since then, the Somali has grown in popularity to become one of the most popular breeds in North America. It is recognized around the world and is a popular entry at many shows as well as in the home.

Although they generally live into their teenage years, the Somali shares the same health concerns as the Abyssinian, including pyruvate kinase deficiency (PKD), renal amyloidosis, and progressive retinal atrophy (PRA). Pyruvate kinase is a regulatory enzyme involved in red blood cell energy metabolism. A deficiency in the enzyme destabilizes red blood cell production resulting in a hemolytic anemia. The symptoms of PKD include severe lethargy, weight loss, jaundice, weakness, and an enlarged abdomen. There is a gene test for the disease that can establish if a cat carries the recessive gene and can pass it on to its offspring. All breeding cats should be tested for the gene to prevent producing an affected kitten.

Renal amyloidosis occurs when amyloid builds up within the kidneys, ultimately leading to kidney failure and death. The symptoms are similar to those of other kidney diseases: excessive thirst and drinking, loss of appetite, weight loss, vomiting, and increased need to urinate. It is relatively rare but genetic inheritance is suspected and it does occur more frequently in Abyssinians and Somalis than in other breeds.

Progressive retinal atrophy is an ocular disease that ends in blindness for the affected cat. As the name implies, it is a degenerative disease of the retina. There is a gene test for PRA and all breeding cats, regardless of breed, should be tested for it.

With gene tests, whether they are for PRA, PKD, or another disease, establish the genes present in a cat for an autosomal recessive disease. This means that affected cats carry two recessive genes, one from each parent. They should never be bred. Carriers have one copy of the recessive gene and will never develop the disease but can pass the gene on to their offspring. This means that they can produce carrier offspring or, if bred to another carrier or affected cat, affected kittens.

Like the Abyssinian, the Somali is a high energy cat that is very active and likes to explore everything. They are curious and intelligent and this leads to a thorough exploration of everything including places you never thought they’d reach. They love to climb and jump and survey their environment from above. Upper shelves, door tops, and cabinet tops are not unusual places to find them. Although they are very agile and not overly prone to knocking things over it is still best to tuck breakables away behind closed doors. They will use their paws to turn on taps, open cupboards, etc.

They like to play with water and are known for enjoying splashing and puddle making using their water bowl or helping you with your bath. It is best to keep their keen intellect occupied with lots of toys and puzzles. If you have an interest in clicker training, the Somali is an ideal breed as they learn quickly and enjoy things like fetch, walking on leash, and other tricks.

The Somali is very affectionate and likes to be involved with his family. He is not a lap cat though and tends to be nearby but not necessarily on you. They do well in homes with children and will tolerate other pets. They are not necessarily keen on sharing the limelight though and are quite content to be the only pet.

Provided that you do not want a quiet cat that curls into your lap and remains there for hours on end, the Somali can be an excellent choice for a family pet. They are fine with being left alone during the day while the household goes off to work or school. They do need weekly grooming to keep the coat in good shape and prevent mats and tangles.