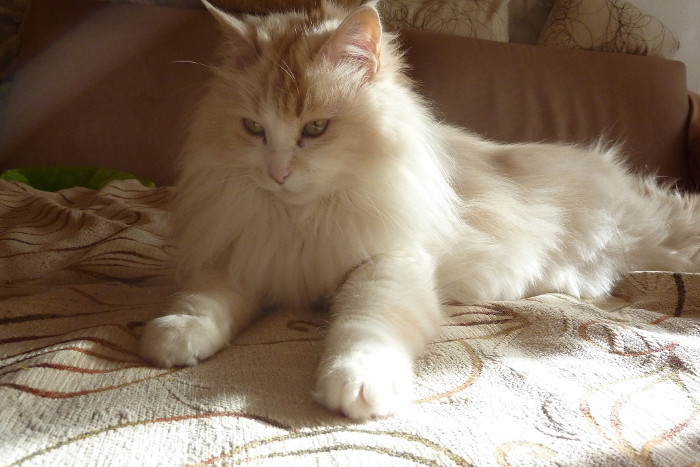 The Turkish Angora may look small and delicate but he is as strong an athlete as any ballerina. He rules his home with an iron paw, loving but most definitely in charge given the opportunity.

The Turkish Angora is a small cat, typically weighing 5 – 9 pounds. The body is long and slender with a slight chest and delicate boning. They should be muscular and strong despite appearances. The legs are long and the hind legs are slightly longer than the forelegs. The feet have toe tufts. The tail is also long and plumy. It tapers from a broad base to a slender tip.

The small head sits atop a delicate, graceful neck. It is a modified wedge with flat planes. The eyes are large and wide set. They are walnut shaped and may be any color, including odd eyed. The eye color does not have to co-ordinate with the coat color. They have a slight upward slant and an open expression. The ears sit high on the head. They are large with a wide base. They should be tufted with hair and have somewhat pointed tips.

The coat is semi-long. It is a single coat and not prone to matting or tangling. It does require regular combing, approximately once a week, to remove dead hair. It sheds seasonally and may be shorter in the warmer months. When shedding, it will need more regular grooming to remove the excess hair and avoid hairballs. At its fullest, the coat has heavy britches and ruff. It can take a few years for a kitten to develop a full adult coat. Although most people think of the Turkish Angora as being white, it can be a number of different colors and patterns including classic and mackerel tabby.

The Turkish Angora is one of the older natural breeds and has been noted in many documents from the 15th and 16th centuries. They likely spread across Europe through visitors and invaders of Turkey. The name comes from modern day Ankara, which was once called Angora. It is a cold climate, hence the warm coat. Its beauty, not surprisingly, caught the eye of many fanciers as it made its way across Europe and it was quite popular in the original cat shows. Unfortunately, in many places the Turkish Angora was used to help boost Persian populations and the crossbred kittens kept more Persian features than Angora features. At one time, the term Angora was simply applied to all longhaired cats. This melting pot almost led to the extinction of the breed.

Thankfully, the Turkish people took tremendous pride in the Turkish Angora and began a breeding program at the Ankara Zoo to preserve the breed and, in particular, the white Turkish Angora. They kept diligent records and continue to breed Turkish Angora cats to this day. In the rest of the world, the breed had basically disappeared. American soldiers deployed in Turkey saw the cats in the 1950s and came home with tails of the beautiful Angoras.

Cat fanciers tried to persuade the Turks to part with some of the cats but it took a lot of persuasion and work before they finally agreed to allow a breeding pair to go to the United States in 1962. At that time, they sent two white cats, a male named Yildiz and a female named Yildizcek, to Colonel and Mrs. Walter Grant. In 1964, a second pair was sent to Sergeant and Mrs. Ivan Leinbach. This began to open the doors and a few more pairs and pregnant cats began to make their way to the United States.

Today, there are Turkish Angora around the world but they still remain somewhat rare. They are still prized for their exquisite beauty. The Ankara Zoo still breeds white Turkish Angora and all registered Angora cats must be able to trace their roots back to Turkey.

The Turkish Angora is a healthy breed that usually lives into its teenage years. Congenital deafness does occur, particularly in white cats with blue eyes. Deafness can be unilateral, which means that only one ear is deaf, or bilateral, which means that both ears are deaf. A unilaterally deaf cat will likely never notice the loss and neither will his owner. A bilaterally deaf cat can have more difficulty but can make an excellent pet nonetheless although care should be taken to avoid startling him.

Ataxia is another condition known to occur in Turkish Angoras. It is a neuromuscular disease that tends to show symptoms when a kitten is two to four weeks of age. It begins with tremors and quickly degenerates to a complete inability to move voluntarily. It is invariably fatal within a very short period of time. The Turkish Angora is the only cat breed in which this disease occurs. Although research is ongoing, little is known at this time.

The Turkish Angora may be small but he has a tendency to rule his home. He will get along well with other pets, including other cats and cat friendly dogs, provided that they respect him as their leader. He expects you to accord him respect as well and give him the attention that is his due. The Turkish Angora is not above doing something wicked to get your attention if he feels you are not meeting your obligation to pay attention to him. He is incredibly intelligent and playful. If he learns bad habits, you will have a terrible time getting him to stop them. Let the Turkish Angora get bored at your peril.

They do love to play and are active, agile, and athletic cats. They will tumble, leap, and jump about as they chase toys and other amusements. The Turkish Angora loves watching from on high and will find his way to the highest places in your home. A tall cat tree is a good investment. They are more than willing to play with children and other pets too.

The Turkish Angora is very affectionate but not given to laying in your lap for extended periods of time. They like to be close to you and involved in your activities but tend to limit cuddles to shorter periods of time as they seek diversions. They do not do well when left at home alone for long periods of time while the rest of the household is away. Some company, whether it is human, feline, or canine, is necessary to keep them happy.

They are talkative cats and will carry on conversations with when you get home and see to it that they have your full attention for as long as they feel they deserve or need it. This is a great pet for a home that wants an interactive cat that loves to play.