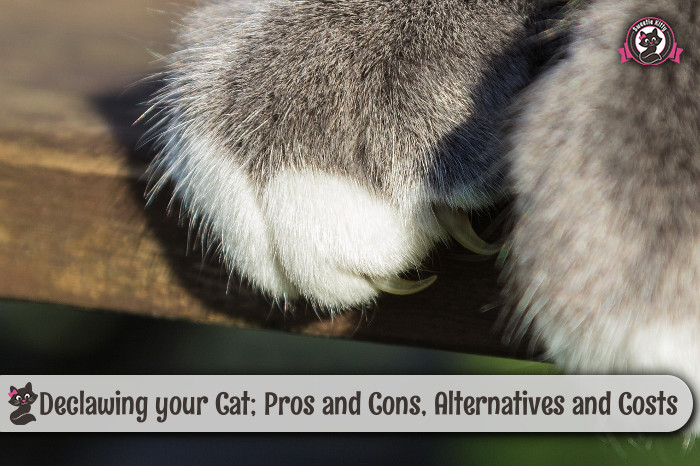 As I write this, my lower left cheek is still stinging from my orange tabby cat, Ginger’s scratch as a result of too much loving her from my part. Although, I can let this one pass as I have done with her hundred scratches before, other cat owners would have rushed to get their clipper and trim their cat’s claws. Lucky for Ginger, I’m a naturalist and wouldn’t dare touch her precious claws, no matter how sharp they already are.

However, each owner’s circumstances are different from one another, and others would go as far as declawing their cats before they could even do any harm. It makes plenty of sense, especially when there are children at home who could easily get harmed with just one cat scratch. Most of the time, owners also choose to declaw their cat if their temperament is pretty unpredictable and would tend to scratch others out of nowhere.

Sometimes, owners also do this for the sake of other cats or other pets in the house, as having multiple cats or pets at home can often result to spats between each animal and can result to bloody fights.

Most cat owners would shrug it off when their cat scratches them. They have gotten scratched so many times before that they’ve gotten so used to it. However, if an owner’s domesticated cat is free enough to wander around the neighborhood, there are serious side-effects if they get scratched by them.

It would be like getting a scratch from a stray cat that can be a carrier of a disease called the cat scratch disease. This is a result from a scratch of a cat that has been exposed outside to harmful bacteria and festers as an infection. Some of the most obvious symptoms of the cat scratch disease on humans would be fever, weight loss, aching joints headache, and chills, among many others.

Additionally, owners with outdoor cats can also carry rabies and tetanus. Fear of these diseases and infections is more than enough for an owner to go through with declawing their cat. Even domesticated cats can exhibit spontaneous scratching since scratching is simply a part of a cat’s nature. Some would argue that, it is better to be safe than sorry.

A lot of cat owners would suggest going for a nail trim instead of going all out and declawing a cat. A cat’s claw is a big part of who they are. Even humans wouldn’t dare to cut off their entire nail when they are too sharp, right? They go and buy nail clippers and cut them themselves or they have them trimmed by their favorite manicurists.

Cat owners can also opt for the same with their cat’s claws. A nail clipper is a one-time affordable buy that ranges from $15 – $25 at a local pet store. It does take a particular skill and an enormous amount of caution and patience for the owner to trim their cat’s claws on their own. That’s why they can always go for the occasional nail trim from their local pet groomers which can start from $12.

Aside from the fact that nail trimming is a cheaper alternative in maintaining their cat’s claws, the cost of declawing will require a pretty hefty sum. There are different methods used in declawing a cat. The method that uses conventional tools can be as low as $100 to as high as $250 or something in between. If an owner decides to go for a more advanced method, this will be an even costlier procedure, which starts from $250 and goes as high as $450.

Owners who would like to declaw their cat would usually have to go out of their way to really search for a veterinarian who is willing to do the procedure since most veterinarians do not recommend it themselves. Veterinarians view the declawing of a cat as a last resort and should only be administered if all other options have been exhausted.

However, a determined owner who would really rather declaw their cat should be aware and learn the different methods that they can consider to go with. Although, this typically depends on the financial budget of the owner, it can also be a matter of preference and an extensive knowledge of what each methods entails can surely help them decide better. The method of declawing a cat is often referred to as “onychectomy” medically.

The most common method used to declaw cats is the “Rescoe Clipper” method; wherein, a sterile clipper is used to cut off the tips of the bones of the ca’s toes. This is the fastest and most affordable method, since it is a very simple procedure as well. Another method is the “Disarticulation” method which literally removes the bones of the cat through disconnecting the ligaments . This method costs a bit higher than the Rescoe Clipper method. The less bloody and less painful method of all the 3 is the Laser method, which simply uses a laser machine to remove the cat’s bones, instead of using a scalpel to do it.

Other Costs and Procedures

Just like when spaying or neutering a cat, declawing does not just involve the surgery but also has other procedures before the surgery Before declawing a cat, a blood test is required and can cost up to $40 to $50 additionally. During the surgery, anesthesia, pain medications, antibiotics, as well as a 2-day stay in the hospital are also needed, though they are already included in the initial costing. Of course, there would also be a post-surgery examination conducted. After the surgery, a patch that helps release the medications for the pain must also be bought for another $40.

Declawing and its Side-Effects

A cat’s claw is like its identity and is as natural as their purring. It will be like altering who they truly are and leaving them defenseless. Could you imagine a Lion or Tiger without its claws? They wouldn’t survive or rule the jungle without them. Declawing a cat only triggers an even more aggressive behavior, as they will continue to go through so much pain even after months of their surgery. It’s no wonder many countries have banned the declawing of cats.