When kittens emerge from the womb after Mommy has carried them for around sixty-three days, they’re not exactly impressive. They’re blind, deaf almost hairless and unable to walk. The only senses available to them are touch and smell, which they mostly use for finding their way to the milk supply! During these first few days they can’t even meow properly, but communicate mostly with squeaks. They’re really not the lean, mean hunting machines they will become later! So when do kittens open their eyes, and more importantly, when will they actually be able to see?

At this stage all everyone, including the queen, (also known as Mommy) wants to do is eat and sleep! (Making milk really takes it out of you – I should know!) The cat’s milk is ideally suited for the formation and growth of the babies.

Even when the eyes are closed, they are still developing behind the eyelid, believe it or not! In the first few days after birth you may occasionally see a little bit of a gleam between a pair of sticky eyelids that tells you that yes, there are actually eyes there.

So when do kittens eyes open? They start to really unstick when kitty is around seven to ten days old. They open fairly gradually, often taking two or three days, and sometimes one will open before the other! (Ever seen that? Cute as a button!) If the eyes are not open by the time the kitten is two weeks old it’s time to see the vet.

Try not to upset Mommy too much at this stage, since she really doesn’t like you poking, prodding and picking her babies up. Remember that she’s still full of oxytocin, the “mothering hormone” and you can really stress her out if you interfere too much. Generally speaking, if the little ball of fluff still can’t show you two blue eyes then it means “don’t touch!” 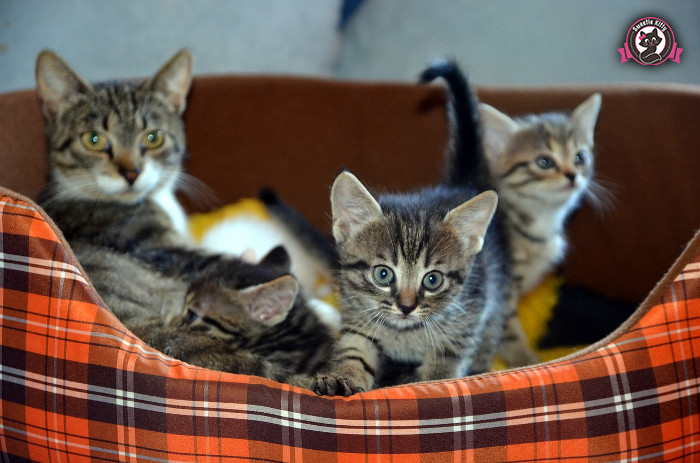 It depends on what you mean by seeing. If you mean do they have full stereoscopic vision that’s as sharp as a high definition TV, then no, definitely not. If you mean can they see a small black and white TV with a badly defined picture wearing a pair of unfocused glasses, that may be a better comparison. They have vision that’s very poorly developed and is really no better than a black and white blur. The retina, which is the light-sensitive part at the back of the eye, is not fully mature, so they can’t yet see as well as Mommy. They still don’t have the ability to focus really well or to make sense of what they see, but from this point, it’s onwards and upwards and grow, grow, grow!

What Do they See At First?

A kitten’s world is very small at this age, so as soon as he can see just a tiny bit the first thing he’ll be able to recognize is Mommy, who is, after all, the most important person in his life. He couldn’t live without her, after all! He can’t really follow her around much since his new legs are still a bit wobbly. The sharpest vision the kitten has is around two to three feet in front of him.

His paw-eye coordination is still not quite 100% either, though Mother Nature is taking care of all this in her own good time. Nearly all kittens are ready to take on the world at between five and seven weeks. They are still fairly color blind, though. This will get better over the next few weeks as the kitten’s eye fluids become transparent, but they will never see color as well as we do, surprisingly enough!.

Wow! I would love to have a cat’s eyes! By the time his eyes have been open for ten weeks and his vision is sixteen times better than it was when he first opened them! The eyes of all mammals are complicated and efficient biological machines, but like most sophisticated pieces of electronics, cats’ eyes have two “killer apps” that make them truly outstanding!

Cats have the most amazing pupils. If you look at them in bright sunlight you’ll see that they are only a hair’s breadth thick, but in deep twilight or darkness, they have expanded to become an almost complete circle, nearly obscuring the iris. This means that cats can see in even the teeniest bit of light.

Their retinas are also covered with reflective layers which sharpen the images which the cat sees. This means that their vision is six times better than ours and they can see very clearly when we’re stumbling about in total darkness!

When Do Kittens’ Eyes Change Color?

Are all kittens born with blue eyes? Well, yes and no. All during this maturing phase, the kitten is refining her visual skills and  perception. While this is happening her eyes LOOK blue, but in fact they’re not! (It’s a bit hard to get your head round that!) In fact, her eyesight may not be fully developed till she’s between three and six months of age, and during that time the blue color is caused by light being bounced off the layers of the cornea, the eye’s lens. It’s the same effect that causes the sky to appear blue!

The kitten’s eye color begins to change around seven weeks of age, and that’s because of a pigment in the kitten’s eyes called melanin. The amount of melanin will determine the final color of the cat’s eyes unless it’s a blue-eyed breed like the Siamese.

While the kittens are still at the very early stage of development, a lot of valuable skills are learned through play. This is a fairly rough-and-tumble business with a lot of stamping, swatting, cuffing and scratching going on so delicate things like eyes may take a bit of punishment! Keep a look out for scratches and/or a damaged third eyelid.

Infections of the eye may manifest themselves in a clear, yellow or green discharge, crusty eyes, red eyes, swelling or cloudiness. The cat may even be pawing at her eye. Wash them carefully with a cotton bud, clean water or any cleaning fluid PRESCRIBED BY YOUR VET!

Your poor kitty may be suffering from a range of things like conjunctivitis, keratitis, retinal disease or a host of other conditions. If the symptoms persist take her to your vet at once. He or she is the best go-to guy for everything cattish!

Last but not least, love is the best medicine for any disorder!