What can keep a cat entertained for hours? Apart from torturing a mouse, that is? Scrabble? Monopoly? Sleep? Catnip? Even the most casual of kitty watchers can tell you that all cats like to “kill” things. They are just made that way, and that’s what makes them – believe it or not – the sixth-most successful predator in the world. Sixth, I hear you say? That’s not very good! But consider the competition. They are better than tigers, lions, polar bears, and wolves. So there! But it still doesn’t answer the question – why DO cats like string?

Because it looks like a snake! Cats have a love-hate relationship with snakes. When I say “love” I mean in the sense that they’d like them on a plate with a side of French Fries. Cats are hardwired to hunt and kill moving things, and if they writhe and wriggle a lot this triggers the cat’s predatory imperative to kill. Your innocent-looking little moggy can take on a big scaly snake of up to six feet long, a good supper for a cat, but only if it’s non-poisonous.

But cats hate snakes! One of the reasons why cats and snakes are mortal enemies is that they both like to eat the same type of prey. Snakes will chow down on mice, rats, birds and birds’ eggs and any other form of animal protein they can get their fangs into! This is exactly the same menu that kitties like. So you can see exactly why cats hate snakes – if the snake isn’t actually on kitty’s plate he’s stealing the food off it! A cat is pre-programmed by Mother Nature to destroy a snake whenever it sees one, not just because he wants to eat it, but because of the competition.

It therefore follows that since a snake is a long, skinny, wiggly thing, and string is also long, thin and wiggly, cats are going to try to “kill” the string.

Pretty pictures of kittens playing with skeins of wool appear everywhere you look these days. Well, why shouldn’t they? The only thing cuter than a kitten with a ball of wool is two kittens with two balls of wool! Cute though it undoubtedly is, though, this kind of image can do a lot of harm. What harm? It’s just a ball of yarn. What’s he going to do? Accidentally knit himself a sweater? Of course not – but a cat is a hunter and instinct tells him that movement = prey = food, so that ball of wool is in effect a prey animal. It’s easy to move around and a cat can chase and torture his “prey” for a long, long time. This is DANGEROUS! 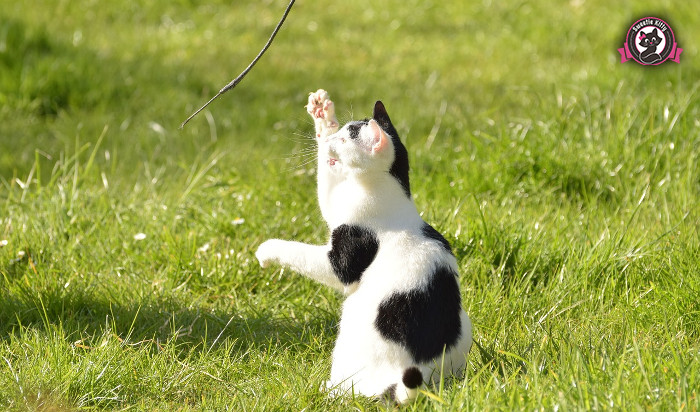 If you’re relatively new to the joys of cat parenting you need to know a few things about a cat’s anatomy. Being the efficient carnivores that they are, cats have rough tongues with barbs that point backward all over them. These help to rasp the flesh off bones and clean their coats, getting rid of excess hair, dirt and parasites. Why do you think your cat is always so clean? They have one design flaw, though. Cats can’t spit because anything that goes in has to follow the direction of the barbs – straight down his throat! This is perfectly fine if it’s a little mouse or a lizard, but if it’s yarn, which just goes on and on – well, you see his problem, don’t you? If it’s stuck on his tongue you may not even notice it! You’ll notice it later, though, because that innocent – looking bit of string can block his digestive passage all the way down to his intestines.

You know the distressing images you sometimes see of seabirds getting caught in fishing lines? That’s exactly what can happen to your kitty with a ball of string. It could even strangle him, and if he gets it wrapped around a paw and can’t get it off he can severely hurt himself.

String-based toys are just as bad. Toys that are meant to imitate fishing rods are fabulous when you’re present and you’re actually playing with your kitty, but don’t ever let them be alone with them. Should the cat chew on them or get tied up in them they can injure him severely. If the end of the string gets snagged on something it could seriously hurt or even kill your cat by strangling it or even breaking its neck. And we all know that it might just break our hearts too! To stop this happening put all his toys in an inaccessible place, and never let him play with them when you’re not there.

So you thought that string was all you had to worry about? Uh-uh! Elastic bands, thread, and feathers are all potential hazards too, and be extra careful of sewing needles!

To check for obstructions: First, open kitty’s mouth. Even if you can see a bit of the yarn, leave it alone because you don’t know what’s going on further down his digestive tract and you might do more harm than good. Hustle him away to the vet as quickly as you can, because he has the tools and the training to deal with these things. D.I.Y. medicine is never a good idea!

When you’re buying kitty toys imagine you’re buying for a baby because the same rules apply. OK, we’ve established that string is probably not high on the “must-haves” for kitty’s Christmas list, so what can he have? Make sure that whatever you buy him is of good quality and is not going to fall apart at the first bite, swat or pounce. Kitties are not known for their gentleness! Ensure that it’s big enough not to be choked on and has no sharp edges. If you are a sewer or knitter keep your yarn, needles, and scissors somewhere safe, bearing in mind that kitties are excellent jumpers! You don’t have to spend a lot of money either – don’t forget the tried and trusted cardboard boxes and paper bags!

If string really is your kitty’s thing there’s nothing wrong with indulging him now and then as long as you’re there too! Cats will be cats! They don’t always do as they are told – they’re just like toddlers in that respect. As toddlers always have to have their boundaries, so do cats, and they need a responsible parent to look out for them in matters of safety. And why do we go to all this trouble for our furry feline friends? Because we love them, of course!