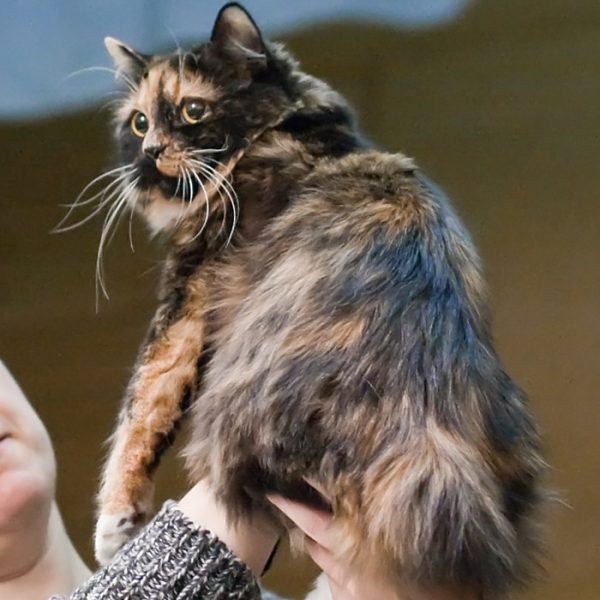 Round is an apt word to describe the Cymric. They are medium sized cats, typically weighing 7 – 15 pounds. The body is short and cobby and combined with the full, thick coat appears round. The back curves from the base of the neck through to the rump. The head is also round and broad. The ears are moderately sized with a wide base that tapers towards the tip. The eyes are rounded and angled upwards on the outer edges. The colour matches the coat colour. The Cymric is substantial in appearance with sturdy bones. The legs are quite unusual. The forelegs are slightly shorter than the hind legs, giving them a unique gait and rabbit-like appearance.

The coat is medium long and silky in texture. It has an open outer coat and a thick undercoat give it a padded appearance. There is longer hair on the britches and furnishings on the ears and between the toes. Regular brushing will help cut down on shedding and keep the coat looking good.

The most readily identified feature of the Cymric though is his tail or lack thereof. There are actually four different tail lengths recognized within the breed. No tail at all is referred to as a rumpy. A rumpy riser has only a few vertebrae of the tail present. A stumpy has slightly more and it may be somewhat deformed in appearance. A longy has a normal length tail. Some breeders will dock longys to maintain the appearance of tailless-ness. However, longys fill an important spot in breeding programs. The gene responsible for the absence of a tail is a dominant gene and only one needs to be present for the cat to have no tail. However, the presence of two of these genes is fatal and kittens are stillborn. In order to preserve the gene pool and reduce the number of stillborn kittens, longs are frequently bred to rumpys and rumpy risers.

Both the Manx and Cymric originated on the Isle of Man off the coast of Great Britain. It is not far from Wales and the Welsh word for Wales is “Cymru” which is where the name Cymric comes from. While a mutation is the most likely cause of the first tailless kittens, it is the isolation of the island that created the right circumstances for the mutation to take hold and become a characteristic of the population.

How cats came to the Isle of Man is unknown although they likely arrived with various visitors to the island. There is a fanciful tale that they lost their tail because they were late getting to the Ark and Noah shut the door of the Ark on the tail, removing it. There are references to tailless cats as far back as the 18th century and the mutation definitely occurred on the Isle of Man. The longer coated versions of the Manx were likely always present within the population although not nearly as popular as their short-coated brethren.

Their unique appearance caught the attention of cat fanciers and the Manx was one of the first breeds shown at cat shows. The Cymric took much longer to catch on and remains far less popular than the Manx.

While the lack of a tail is unique, it is not without its problems. Many kittens are born with spinal defects and neurological issues and develop digestive issues and problems with their colon and urinary tract. Collectively these problems are known as Manx Syndrome. Most problems are apparent by the time a kitten is four months of age and it is strongly suggested that you wait that long before bringing a Cymric into your home. Always dealing with a reputable breeder that provides a written contract which details what happens should your kitten develop Manx Syndrome is also very important. Some cats that develop Manx Syndrome will live relatively normal lives although they may need special diets or medications. In other cases, the effects of the syndrome are too severe and the kitten has to be euthanized. Manx Syndrome occurs in approximately 20% of all Cymric kittens and is especially prominent in rumpys.

Although the tail is absent or present in a shorter form, the nerve endings in the tail are quite sensitive and the rump of a Cymric should always be handled with care to avoid causing undue pain. It is also prone to developing arthritis.

They are also prone to patellar luxation, an inherited dislocation of the knees which can occur in one or both rear legs. Because the rear legs are longer than the forelegs, it is important to always provide lots of support for the back end of the cat when picking him up to avoid placing excessive pressure on the spine.

The Cymric is a delightful companion. They love to play games and enjoy fetching toys, walking on leash and are known for a tendency to bury their toys in the same way a dog might bury a bone. They enjoy playing with other cats, children, and cat-friendly dogs. Although active, they are not as active as some other breeds.

The Cymric tends to be very affectionate with his family and welcomes strangers as well. They are always up for some lap time. They do not do well when left alone for long periods though and a companion is advisable if the family will be absent for extended periods of time during the day. The Cymric has lots of love to share and needs company to share it with.

They are excellent jumpers due to the structure of the hind legs and enjoy getting into high places. They are intelligent and curious, so breakables are best kept locked up.

Overall, they are a calm, undemanding cat that is fairly quiet. They will trill and chirp on occasion but are not as talkative as many other breeds of cat. They do enjoy interacting with their family though and even if they aren’t big conversationalists, they find other ways to express their affection to family members. They make an excellent choice for a family pet provided that they are introduced to all the members of the family properly.