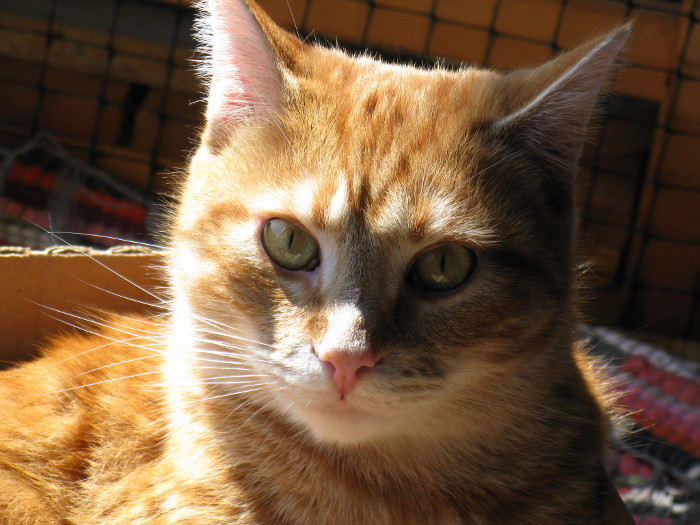 The Manx is one of the best known cat breeds although they are not overly common. The distinctive lack of a tail is generally considered its hallmark trait although Manx cats can have a full or partial tail as well as the tailless variety.

Some have compared the Manx to a bowling ball. They are generally round in appearance and quite substantial. When lifted, they are heavier than you would expect. Like the Cymric, which is the longhaired version of the Manx, the Manx is a medium sized cat generally weighing between 7 and 15 pounds. They have substantial bone structure with a short, cobby body that is somewhat rounded in shape.

The head is rounded and slightly longer than wide with prominent cheeks. The ears taper to rounded tips and are medium sized with a wide base and wide set position on the head. The eyes can be any color although they often match the coat. They are round in shape and large, set on a slight angle upward towards the outer edges. The head sits on a short, thick neck.
The hind legs of the Manx are unusually long and somewhat rabbit like. One of the many myths surrounding the breed suggests it is the offspring of a rabbit and a cat. While it does tend to hop and is a very capable jumper, the Manx is all cat.

The Manx has a short, double coat that requires little grooming. It comes in all colors. It is very thick and adds to the rounded appearance of the cat. Some registries consider the longer coated version (Cymric) to be the same breed and recognize all of them as Manx cats while others keep them as two separate but related breeds.

The tail is the best known trait of the breed. A genetic mutation resulted in cats with varying amounts of tail. They can have no tail at all in which case they are referred to as a “rumpy”. If there is just a small bit of bone protruding at the rump, they are called a “rumpy riser”. If there is a tail but it is shorter than a normal length, the cat is referred to as a “stumpy”. A cat with a full length tail is called a “longy”. All four tail lengths can occur within a single litter of kittens. Only rumpys and rumpy risers can be shown but all are Manx cats.

The Manx cat originated on the Isle of Man along with the Cymric. Because of the island’s isolation, the gene mutation that caused the absence of a tail became rooted in the population and much more common than it otherwise would without human interference to perpetuate it.

How cats came to be on the Isle of Man is unknown but it is most likely that they arrived on ships with various visitors to the island throughout history. The unique appearance of the Manx has resulted in a variety of unique myths surrounding its origins. The cabbit (part rabbit and part cat) is one such as is the tale of them losing their tail when Noah shut the door of the ark on it.

The gene responsible for the absent tail is a dominant gene and all Manx cats that have no tail carry it. Carrying two copies of the gene is lethal in utero and the kittens are stillborn. Many breeders purposefully cross longys to rumpys and rumpy risers to reduce the risk of still born kittens. Because many owners of Manx cats expect them to have no tail, there are some breeders who will dock longys and stumpys to produce the tailless look.

The gene that causes the absent tail of the Manx can also cause other problems. They are collectively referred to as Manx Syndrome. They include spinal deformities and issues related to spinal development, neurological problems, digestive issues including problems with the colon, and urinary tract issues. There is a range in severity with some cats being able to live normal lives with special diets and medication while others are too severely affected and must be euthanized. Manx Syndrome generally shows up by the time a kitten is four month old and it is recommended that you wait until your kitten is that age before bringing him home. Manx Syndrome occurs in about 20% of the Manx population. Always discuss Manx Syndrome and make sure it is clearly addressed in the purchase contract you sign with the breeder.

A healthy Manx cat will live into their teens. They are prone to the same issues as other cats including patellar luxation. The extra-long legs combined with the shortened spine can make them more prone to arthritis as they age. The nerve endings at the tail are quite sensitive and any cat without a full tail should always be handled carefully around the rear to avoid causing pain. When lifting the Manx it is important to support the rear legs to avoid putting excess pressure on the spine.

The Manx is an easy going, laid back cat. They are prolific jumpers and enjoy watching things from on high so breakables should be carefully stored. They are playful and energetic but not as demanding as some other breeds. They will play fetch, learn to walk on leash, and love to chase toys about the house. They have also been known to bury toys. The Manx is also known to enjoy water and will gladly play with a dripping tap or splash in the sink.

They are affectionate cats and will gladly join you on the couch for some cuddle time. They tend to bond strongly with their families. They welcome strangers but can be territorial and will not hesitate to threaten another animal they perceive as an intruder on their property. They will adapt to other cat friendly pets provided they are introduced properly.

They are ideal companions for homes with children and will do well with other pets provided that they are cat friendly. The Manx tends to make chirping and trilling noises but is not a particularly vocal cat. They will carry on a conversation if encouraged but are generally soft spoken, quiet cats. They are content to be on their own or have company, making them a good choice for homes where the family is absent during the day.