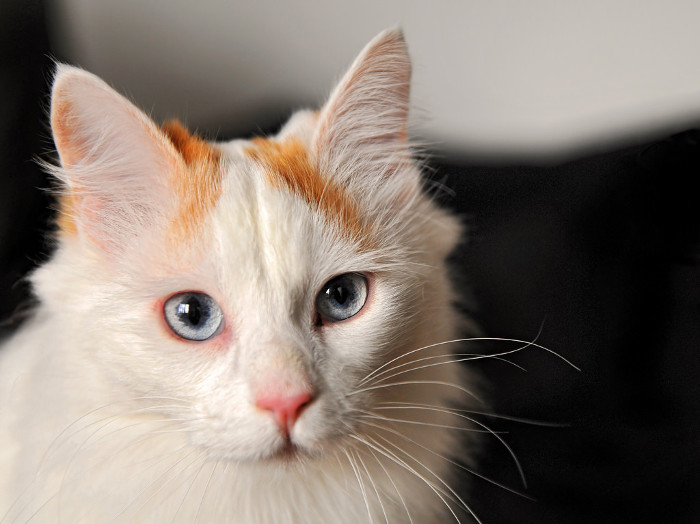 Turkish Van by Tambako The Jaguar

The Turkish Van is also known as the “swimming cat” and should not be confused with the Turkish Angora. The two breeds are quite different in a number of features including size, coat, and personality.

The Turkish Van is a large cat. Females typically weigh 7 to 12 and males can weigh 10 to 20 pounds. They can take three to five years to reach full size and mature slowly. They have a long body that is sturdy with lots of hard muscle. This is an athletic cat and the word delicate, which is often associated with the Turkish Angora, should not cross your mind when you look at him. Both tail and legs are of moderate length. The hind legs are slightly longer than the forelegs. Toes are tufted when in full winter coat. The hair on the tail is at least two inches in length when the cat is in full winter coat. It is plumy or brush-like.

The head sits atop a short, muscular neck. It is large and at least moderately broad, broader in males than females. It is a modified wedge in shape with rounded edges and high cheek bones. It should be slightly longer than it is wide. The eyes are walnut or peach pit shaped. They can be any color including odd eyed and the color need not co-ordinate with coat color. The eyes are large and obliquely set. The ears are set on high on the head but well apart. They, too, are on the large side. The tips are slightly rounded with well feathered interiors.

The coat changes seasonally, perhaps in response to the seasonal extremes of his ancestral habitat in Turkey. In winter, it is full of fluffy britches and a full ruff. In summer, it sheds to the point where it is almost short and only has feathering at the britches and tummy. It is a single coat that feels like cashmere and has a unique silky texture that is very water-resistant, regardless of length. The only solid color allowed in Turkish Vans is solid white. The latter is sometimes called Van Kedi and some areas and registries consider them to be a separate breed. The only allowable pattern other than solid white is the Van pattern, so named because it is the natural color pattern of this breed but does occur in other breeds. The body is white with color only on the head and tail. Sometimes, a small thumbprint of color also appears on the shoulder. This is called the Mark of Allah.

The Turkish Van evolved in the area of Lake Van in Turkey. It is an ancient natural breed with relics in the area that are 5000 years old bearing cats resembling the Turkish Van. Although they likely made their way through Europe as a result of the Crusades and various visitors to Turkey, they have never been well known outside of their home country. In Turkey though, they are considered a regional treasure and, like the Turkish Angora, are purposefully preserved. Nonetheless, they remain rare in and out of Turkey.

In 1955, Laura Lushington and Sonia Halliday were photographing the Turkish countryside. They had seen some of the cats and become quite enamored with them. They were given a pair of unrelated kittens to travel with. On their various stops, they noticed how much the cats enjoyed swimming in the lakes. This highly unusual trait caught their attention along with the cat’s unusual markings and coat.

When they returned to England, they brought the two kittens back and began a breeding program, eventually bringing more cats from Turkey to England. They discovered that the cats bred true and began the work involved to make the Turkish Van a registered breed. The first cats made their way to the United States in the 1970s. Today, the breed has pockets of breeders around the world but does remain relatively rare even in his native Turkey. Although it is possible to get a Turkish Van from Turkey, the Turks are, understandably, protective and don’t let them go easily.

Like many other natural breeds, Mother Nature has done much of the hard work to eliminate major diseases from the Turkish Van gene pool. Breeding cats should be screened for the same diseases that all cats are including hypertrophic cardiomyopathy (HCM) but there are no diseases specific to the Turkish Van or that the breed is more prone to than any other cat. Solid white cats can be prone to deafness either unilaterally or bilaterally like any other solid white cat.

The Turkish Van is a very active and playful cat. They like to run, and run, and run. Mad dashes about the house are not unusual. Like many other athletic breeds, they love to climb and jump and will make their way to the highest perches in your home. A tall cat tree is a good idea in a home with a Turkish Van. So is locking up your breakables in places they cannot get into. The Turkish Van is unusually clumsy for a cat and they can knock items over as they race about the home. Of course, sometimes they knock things over just to see what will happen too.

Like man intelligent felines, the Turkish Van is curious and needs lots of stimulation in the form of toys and puzzles for him to solve. They are quick to learn tricks and will play for long periods of time with children. They are not lap cats and do not like being held for any length of time. It is important that children understand this as the cat may react poorly to being imprisoned in a child’s arms.

The Turkish Van is affectionate though and will join you for a quick cuddle on the couch or a nap on your bed. They like to be near you and involved in your activities, they just aren’t likely to decide to spend a few hours on your lap while you read your book. They do love water and will swim in ponds, lakes, swimming pools, and your bathtub. It is important to close the lid to your toilet and do expect them to figure out how to turn the taps on.

Although the Turkish Van will get along well with other pets, they are quite content to be an only cat as well. They can be an excellent choice for someone who doesn’t mind an active cat and would like a breed that is rare but very beautiful.