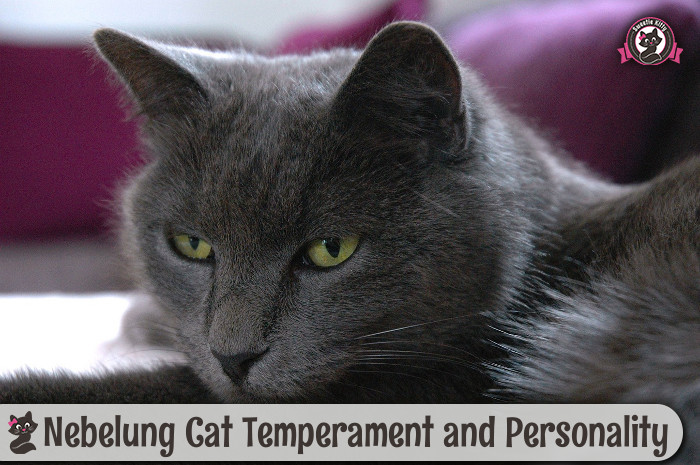 Cats are affectionate creatures, and don’t let any of those dog-loving cat haters tell you otherwise! They’re also intelligent and can learn tricks with a little coaching and a bit of patience. The Nebelung is a particularly clever and beautiful breed. It’s often called “Creature of the Mist” because of its smoky gray color. In terms of cat breeds, this is definitely one of the new kids on the block! It isn’t yet a particularly popular breed, but give it time; it was only standardized in 1984. (I have socks older than that!) If you’ve never heard of this gorgeous creature, you don’t know what you’re missing, so let me tell you.

The Nebelung is a medium sized cat,  with females weighing around 3.5 kilograms (7pounds 11 ounces) and males being quite a bit heavier at 6.5 kilograms (14.5 pounds). It’s an elongated, sleek, elegant creature, with a collar of fur round the neck and more fur behind the ears.  All its features are pointed rather than rounded, and its eyes are green or green-gold. The coat is long, with the fur on the tail being longer and thicker than the rest of the body. The Nebelung’s color is a blue-gray tipped with silver, and apart from a leopard’s spots, I can’t imagine anything more beautiful!  The Nebelung is almost identical in every respect to the Russian Blue, except that the Russian Blue has thick short hair and the Nebelung’s is long and silky, with an extremely dense undercoat. Despite this thick fur, the Nebelung doesn’t need much grooming and is content with a thorough brushing once a week. 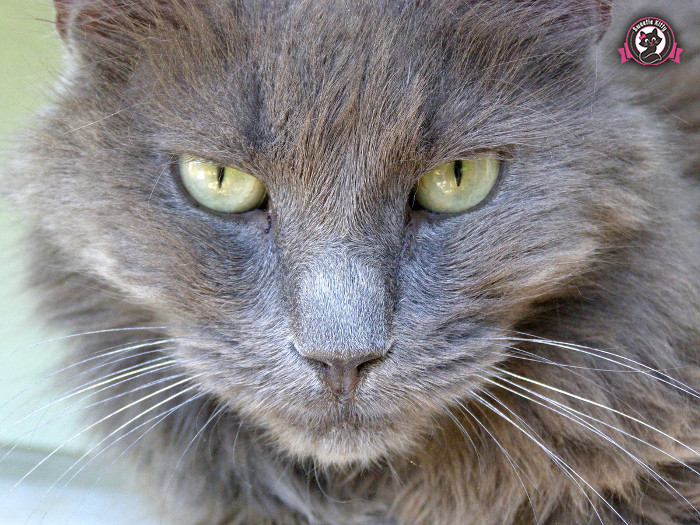 If you have a Nebelung in the house, you’re in for a good time! Nebelungs are sociable, outgoing and friendly, but their great good nature masks their fearsome intellect! Although they’re quite a playful and athletic, they do just as well indoors as outdoors.  They thrive on the companionship of the few people they know and love, and will stay bonded to them as long as they live. They are quite neurotic in some ways though – don’t ignore your Nebelung or he’ll take it very personally. If you don’t smother him with love all day every day he might just wonder why and worry himself sick! These cats can get very anxious indeed!
Nebelungs will happily tolerate another cat, but they avoid strangers, even going so far as to hide under the bed from them! (Is this where the term “scaredy-cat” came from?

They love routine, and if your alarm clock ever breaks down there’s no need to worry if you’re owned by a Nebelung. They’ll wake you up at the appropriate time with the amazing biological alarm clock in their stomachs. It tells the time twice a day without fail – breakfast time and supper time!  The fact that you’re sleeping is just not their problem! They want food and they want it NOW!

In fact, Nebelungs are very good at telling you what they want – in no uncertain terms! If there’s a problem you will know about it pretty darn quickly! And since they are fussy little critturs this happens quite frequently.

“Hey Ma! My litter tray is filthy! What are you going to do about it?”

“Hey Ma! My food bowl’s empty! Do you want me to starve to death?”

“Hey Ma! Get that computer off your lap! I want to sit there!” And so on, and so on…

Nebelungs can exhibit a number of very dog-like traits, such as their loving and loyal relationship with their close people. They will even follow their Chosen One from place to place just to be near them, and absolutely ADORE lap sitting. They don’t adapt well to change, though, and will take a while to get used to any new situation.

Nebelungs are very clever cats, so it’s no surprise to learn that compared to most other members of its species, it’s relatively easy to train them to walk on leashes – yes, really! If taught early enough as kittens, they can be trained without too much trouble.

Nebelungs do well as inside cats as long as they have a place to play and get rid of all that pent-up feline energy. A semi-enclosed space like a catio is ideal, since they can feel the wind in their fur and come inside when it’s cold!

Nebelungs are not rough-housers and don’t like the excitable play of young children, so the ideal environment for them is an adult household or one with older children who understand cats. These guys are really not toddler-friendly! Their dream would be living with their subjects as solitary cats – kings or queens of their houses!bree 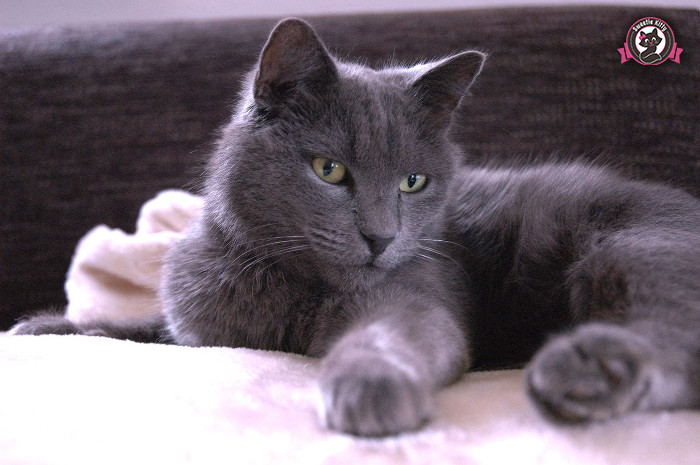 A Bit Of History…

During the 1980’s Cora Cobb gave her son a black domestic shorthair called Elsa. There was nothing special about her – she was just a bog-standard Moggy – but wait! She mated with a Russian Blue and the resultant five kittens had short coats, but there was one boy with a longer coat, and he was named Siegfried. A few months later a long-haired female, Brunhilde, was born. Cora Cobb started to breed, trying to get more long-haired kittens, and Siegfried and Brunhilde became the very first Nebelungs.

In May 1986 Brunhilde had three kittens with blue long-haired coats. Cora Cobb applied for recognition by the The International Cat Association (TICA) and was advised by their genetics expert to register as a Russian Blue, the only difference being the longer coat. In 1987 the Nebelung was recognized as an official breed. The only way to spread the breed was by mating with Russian Blues, which many owners were reluctant to do – BUT!!! The owner of Supreme Grand Champion Vladimir of Castlecats allowed her male Russian Blue to mate with one of Brunhilde’s kittens, and the rest, as they say, is history!  The Cat Fanciers Federation (CFF) and the Traditional Cat Association (TCA) have accepted the Nebelungs  (wow – how gracious of them!) However, the Cat Fanciers Association (CFA) are still holding out! But they can’t be stubborn forever!

So you’ve got your pedigree Nebelung, and he’s absolutely drop-dead gorgeous, but although he’s one of those aristocratic chaps with a long name, he’s your pal, and needs tons and tons of love!