The Maine Coon is the biggest breed of household cat around. While he may not be the most athletic of kitties (he prefers all four feet firmly on the ground unless the tuna tin is out of reach) he does need a lot of chow to keep that big heart beating! So if you are owned by a Maine Coon cat, be prepared to spend. Your household budget may have to stretch a bit! Keeping a cat this size fed and watered is a full time job, so read and learn!

What Is the Best Diet for Maine Coon Cats?

Does a purebred cat like a Maine Coon need a special diet? The short answer is no, but it does have to be of good quality. Coonies are big and behave like infants throughout their lives, so they do burn a lot of energy.

There is a bit of a controversy going on at the moment about whether to feed your Coonie dry food. They argue that cats in the wild only eat protein in the shape of fresh meat, and that the ingredients in dry cat food are at best inadequate and at worst toxic. However, most cats I know survive and thrive on kibble. Yes, there’s no doubt that if you put a live rat in front of your Coonie he’d prefer that, especially since he’s a mighty hunter, but I can’t see too many of us going out to catch one!

There are good arguments for both wet food and dry food, with many vets arguing that dry kibble is better for reducing the buildup of tartar on their teeth, although dry food isn’t a good argument for neglecting their dental needs. For a lot of cat owners, dry cat food is cheaper and more convenient, and that is a good argument in itself.

Both kibble and canned food have everything your cat needs for his health and well-being. The main contrast between them is the amount of water they contain. Tinned food can help cats with kidney problems since the cats urinate more frequently (although you do get medicated kibble for that too) and can be preferable for the picky cat who turns up his aristocratic nose at dry food! Wet food also makes him feel more satisfied since there is a bigger volume of food, so if he needs to lose weight, this may help.

So why not compromise? Feed him both – dry food most of the time suits him or not because he’ll tell you in no time flat!

Whether you decide to feed your Coonie wet food, dry food or both, don’t give him the same stuff every day! How would you like to eat pasta or hamburgers or fish and chips every day? You’d soon get fed up! (Pardon the pun!)

Try not to give him too much tuna. Cats may love it, but it’s not a natural part of their diet and they can actually become addicted to it. Yes, REALLY! Tuna is very high in mercury and can cause neurological damage in daily amounts in the long term, but as long as it’s only once in a while there’s no harm done. If you’re really worried though, try sardines instead.

Don’t choose a food with any sort of grain in it. It can trigger allergies and can cause fat cats! If there’s one thing you should avoid at all costs, it’s a fat Coonie – imagine lifting him up for a cuddle and discovering you’d slipped a disc!

How Much to Feed a Maine Coon Cat?

As we discussed before, feeding a Maine Coon is not easy if you’re going to achieve a balance between too much and not enough. If you have smaller cats, the Coonie can easily eat twice as much as they do. I kid you not!

The general consensus seems to be that there is no strictly recommended amount, but a mixture of wet and dry food is thought to be the best. You can easily check if your cat is getting fat, though.

How Much Should a Maine Coon Cat Weigh?

Maine Coons are BIG cats! Males at 11-25 lbs (5-11.5 kgs) and females at 8-20lbs (3.75-9kgs) but this is a rough estimate. I’ve even heard of one male tipping the scales at 30 lbs (13.5 kgs) but this was either grossly exaggerated or that cat was grossly overweight! They don’t attain their full size till they are between 3 and 5 years old. They are also called the American Longhair although maybe that should be the Long CAT, because some of them measure 40 inches (102 cms) nose to tail. The longest cat ever measured was in the Guinness Book of Records and stretched to over 46.6 inches (118.3 cms)!

To find out if your Coonie is getting fat, stand over him and look down at him. The bit of his body just behind his ribs and just before his hips should curve inwards just a little bit, giving him a waist, just like us. If you can’t see one, or if that part of him is bigger than his ribs or hips, he may be on his way to being a tubby cat!

Look at him from the side. The area just behind his ribs and in front of his back legs should be smaller than the chest. This is called an abdominal tuck. If you can’t see it, your cat may be in danger of obesity.

Then run your hands over your cat’s ribs. You should be able to feel them quite easily, but they shouldn’t be sticking out. This, of course, means he’s too thin. However, if it’s difficult to feel them, or you have to really push down hard, then he’s getting fat!

Try touching the area at the base of your Coonie’s tail. There should be easily accessible bones there. If you can’t feel them, then he‘s putting on the pounds!

Check out all his other bony bits. If you run your hand over his spine, shoulders and hips you should be able to easily feel his skeleton underneath, and if they protrude your cat may be too thin. But if, as with the ribs, you have to work hard to feel them, your cat’s probably eating too much!

Finally, you have probably noticed the little saggy bits just in front of your cat’s back legs. This is called the primordial pouch, and it’s there, believe it or not, to stop your cat’s stomach getting hurt during a fight! One of the aggressive moves cats make during battle is to kick out with their back legs to try to injure their opponent, and the pouch gives them a bit of protection. It’s made of loose skin, but if your cat is putting on weight, it may fill out with fat, so if you do feel that your tabby is becoming a trifle tubby, take him to the vet.

The vet’s scales are specially calibrated for use by animals, so while weighing and assessing him yourself gives you a rough idea whether or not your cat is too fat, the expertise of a veterinary surgeon is the only way to evaluate what the problem is, if there is one at all. If your cat is overweight, she’ll be able to give you the advice you need to get him back to his normal svelte self!

You’ll be asked a lot of questions – but don’t worry, your vet is being thorough. She’ll ask you how often you feed your Gentle Giant, and how much, since obviously extra calories are stored as fat. If you are going to change his diet to help him lose weight, you need a vet’s recommendation first.

Your Coonie may not be getting enough exercise; if you’re at work all day and too tired to play with him at night he may become bored and sleep a lot.

A hitherto unknown medical condition can cause your kitty to gain weight, so your vet may want to perform examinations and test samples in the lab as well as the surgery. If your Coonie is showing other symptoms, like vomiting or has unusual stools, tell the vet about those too. 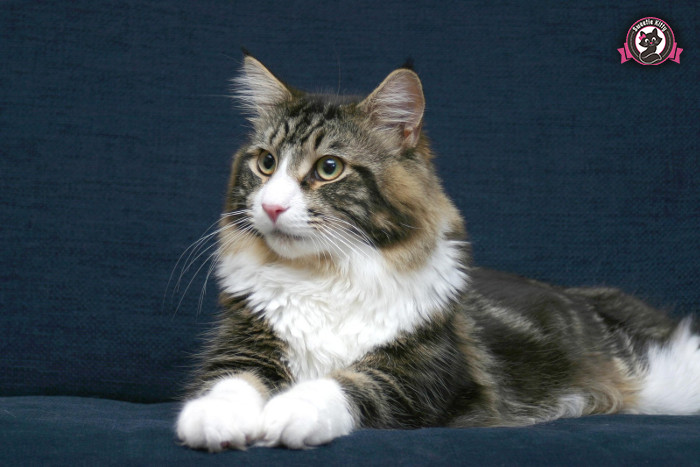 If you’re changing your Coonie’s diet, do it slowly. My cat had to be trained to eat new medicated food but wouldn’t accept it at first, so we tried putting a tiny bit of the new food, then a bit more, then a bit more, till gradually he was only eating the new stuff, and it only took around a week for the full transition. Also, if you like to give your Coonie the odd treat, make sure it’s a “diet” variety and doesn’t increase his normal calorie count.

The best exercise cats can get is the one that mimics his behavior in the wild, such as catching birds and chasing rodents. You can get him a foraging toy, which is a kind of puzzle the cat must learn to take apart to get to the food inside. This is difficult, physical, and gives the cat valuable exercise to help in the fight against those excess pounds! Play with him for half an hour at the end of the day – it will do you both good!

Cats are obligate carnivores which means that they must have meat. In nature they eat nothing but meat, in fact, since they eat small birds and mammals like rodents, birds, and even the odd snake! However many pet cats eat dry food, which is predominantly made of grain based products. These can cause allergies as this is not their natural diet and encourages weight gain. Avoid grain at all costs – there are plenty of other dry foods. Your vet will recommend something more suitable.

Keep an eye on your cat’s weight, since excess weight can creep back on again. Sometimes your vet will let you weigh your cat as a free service, but perhaps you prefer to use your home scales as a rough guide. Just make sure it’s going down, and not up!

This big sweet natured cat will be your constant companion, helper, playmate and friend for life. If you ever have the urge to get one, try to make sure it’s from a shelter for Maine Coons or just an ordinary common or garden cat shelter. There are plenty of lonely Maine Coons out there just waiting to be loved!